A Proud Tradition Of Stupidity 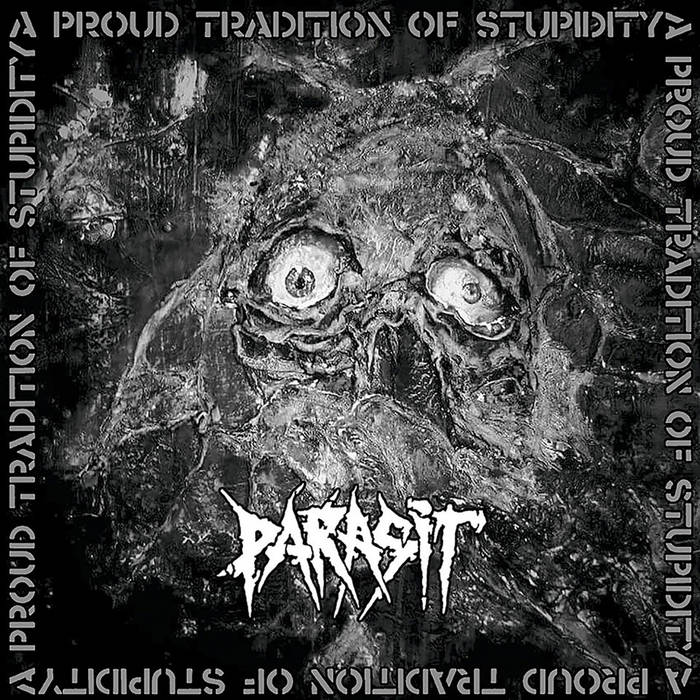 PARASIT from Sweden was formed in the winter 2010/2011 by three ex members of Uncurbed: Michael, Johan and Kenneth. Later Rikard Olsson joined on bass and Pjär Karlman on vocals. After some rehearsals also Simon Frid joined on second vocals.
The plan was to record an album already in the fall of 2011 but it was not possible because of other bands and duties. After some months of rehearsals the full-length album was finally recorded in Studio Underjord, Stockholm in May 2012 with Joona Hassinen. Totally 20 songs including the Disrupt cover “Complaint” were recorded but only 16 appeared on the album.
After having turned down a bunch of gigs because of bad timing and other band duties, PARASIT did their first performance at the underground punkfestival “Hygget” in the south of Sweden in August with bands like Doom, Warcollapse, Distress, Counterblast etc. In the end of 2012 Kenneth Wiklund decided to leave the band because of undefined problems with his hands/fingers. So Rikard replaced Kenneth on guitar and Daniel Sandelin joined on bass.
In March 2013 finally the album "Välj Din Egen Bödel" was released by D-Takt & Råpunk Records (Swe) on LP and the CD was later released by Totalpunk Records (Rus) in October. Same month Rikard Olsson unfortunately decided to leave PARASIT because of his duties with Gadget and personal matters. Then Kenneth came back on guitar and in December PARASIT did their second gig in Stockholm at the Liffey with Institution, Paranoid and Diagnosis? Bastard!
The compilation “Undead - A Tribute to Disrupt” was released on double CD/LP by Power It Up Records (Ger) during 2013.
In March 2014 the five “leftover” songs from the first recording (including the Disrupt cover) was released as a 7” inch EP by Nuclear Fear Records (Spa). Meanwhile the rehearsals went slow but songs for an upcoming album were in the works. Unfortunately Pjär Karlman decided to leave the band in May because of lack of interest when nothing happened. After the summer, the rehearsals became more intense to complete all the songs for the next album. Studio was booked at Communichaos Media Station in Strängnäs operated by Mattias Kennhed (Meanwhile, Burning Kitchen, ex Macrodex, House of Usher etc…)
So in a weekend in April 2015 PARASIT entered the studio and nailed 19 songs. Guest vocals on two songs were done by their good friend Jocke Hammar (Meanwhile, Price Of Silence…). No record label was decided for the release so the search of a label started after the recording foolishly. Luckily a friend and old label boss to Johan was interested to hear it and was blown away when he heard it! So Cyclone Empire Records (Ger) hooked PARASIT up and will release the second album titled “A Proud Tradition Of Stupidity” this spring 2016.
New songs are already in the works and PARASIT will be more active when it comes to play live! More gigs and maybe a small tour will be coming up 2016. In D-Beat We Crust!