Emissary Of All Plagues

by REVEL IN FLESH 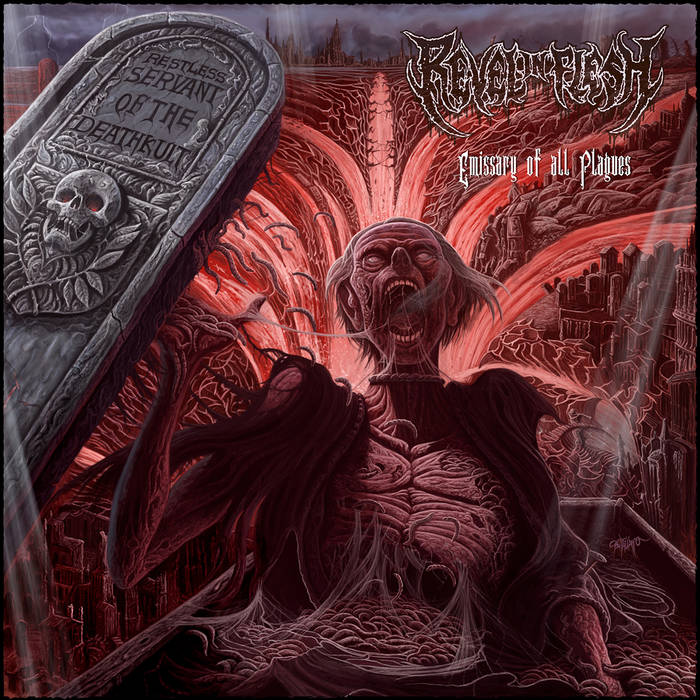 “Both me and the band feel this our best sonic co-operation so far, and to me personally, it is extra cool to finally have nailed what I believe to be the ultimate tribute to the SweDeath Guitar tone!”
(Dan Swanö)

Biography
REVEL IN FLESH was formed by Haubersson (Ex-IMMORTAL RITES) in late 2011. The debut album “Deathevokation” was recorded as a duo with long-time comrade Maggesson (DAWN OF DREAMS, APOPHIS etc.) and was highly acclaimed within the underground scene. The album was produced and mixed in Maggesson's VAULT M. Studios and mastered at UNISOUND Studios by Dan Swanö (EDGE OF SANITY, BLOODBATH etc.). From that point Dan Swanö was involved in all productions of the band so far. Another really important person regarding the visual presentation of the band has been the rising Spanish cover artist Juanjo Castellano, who has been responsible for all album covers, several T-Shirt designs and illustrations thus far.
In spring 2012 the band grew into a full force live band when Vögtsson (Ex- CHAOSREIGN, GRAVEN etc.) on Drums and the two Ex-DEATHVASTATION youngsters Herrmannsgard (Guitars) and Götzberg (Bass) joined. In May 2012 they played their very first show with PAGANIZER from Sweden. The already 3rd gig for REVEL IN FLESH took place on the tent stage of PARTY.SAN Festival and support shows for bands like EVOCATION, DEAD, FLESHCRAWL, BRUJERIA plus a gig at the NOCTURNUS-Festival followed.
In spring 2013 the 2nd longplayer “Manifested darkness” was unleashed. This time the band recruited Dan Swanö for a proper mix & master job and the result offered a major step forward in terms of sound but most of all the whole way of songwriting and expression got much more of a very own touch. More live shows were played (e.g. with VENENUM, OBSCENITY, LAY DOWN ROTTEN or DEADBORN, and at festivals like SUMMER BREEZE, PROTZEN and NRW DEATHFEST) and especially the mini tour with PUTERAEON and the first foreign show in Barcelona (with GRAVEYARD) were kinda milestones for the band.
In 2014 REVEL IN FLESH released several split-7” EPs (w/ PUTERAEON, FERAL, GRAVE WAX and THE DEAD GOATS) and played more great shows with ENTRAILS, HOLY MOSES, FLESHCRAWL or KATAKLYSM and festivals like IN FLAMMEN.
After fulfilling their old contract REVEL IN FLESH signed a new deal with the already familiar business partner CYCLONE EMPIRE.
The release of highly acclaimed 3rd album “Death Kult Legions” in December 2014 brought a massive push to their reputation within the worldwide Death Metal community. REVEL IN FLESH went on their great path of death, released some split-7"s (with HUMILIATION, ZOMBIFICATION and WOMBBATH) and played loads of cool shows (e.g. SUMMER BREEZE OPEN AIR, CHRONICAL MOSHERS OPEN AIR, PROTZEN OPEN AIR, DEATHFEAST OPEN AIR...) and smaller tours with PUTERAEON, GRAVEYARD (ESP), FLESHCRAWL, SOULBURN, DESASTER and many more.
Now by the end of 2016 after 2 years of songwriting and recording REVEL IN FLESH are back with their 4th and probably most melodic album thus far. "Emissary Of All Plagues" is the next logical step in combining atmosphere, groove and pure Death Metal brutality executed in their very own Revelish way! On the 2nd of December 2016 the plague will be unleashed! BEWARE!!!