by DOWN AMONG THE DEAD MEN 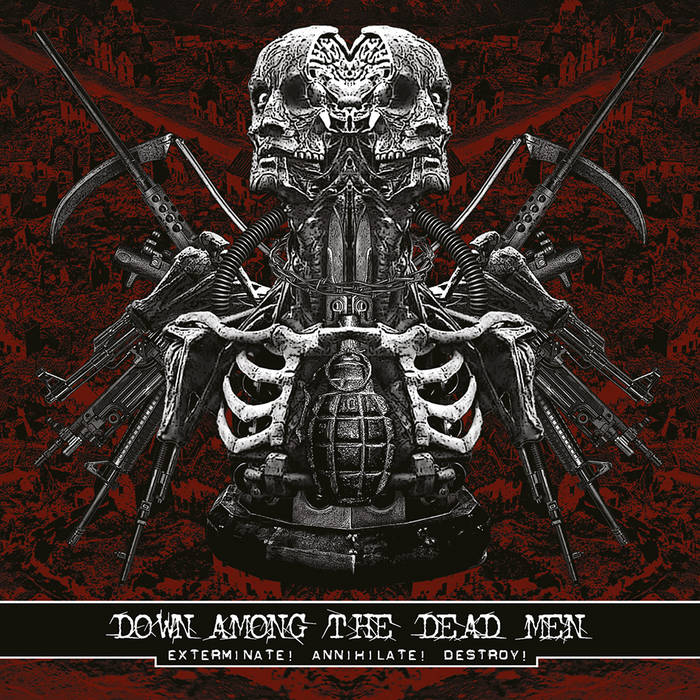 - Merciless and massively killing second album of this Scandinavian Crust-Death supergroup! - DOWN AMONG THE DEAD MEN offers the best possible mix of D-Beat Crust Punk and massive Death Metal a fan can hunger for! - Music recorded at The Rotpit (Sweden) and vocals recorded in the Metal Breakfast Radio HQ (Denmark). The album has a powerfully pounding and relentless production with tracks that pierce the flesh with their hooks and don’t let go. - The album features 2 cover songs that are also featuring guest vocals: First of all there is ANVIL´s “Forged In Fire” featuring Kam Lee (ex- MASSACRE, THE GROTESQUERY, BONE GNAWER) and then there is DISCHARGE´s classic “Protest and Survive” feat. Bob Thunder & Donovan Spenceley, both from Dave’s radio show, Metal Breakfast Radio. - Main man Dave Ingram is legendary for his vocal duties with two of the most legendary UK Death Metal outfits: BENEDICTION & BOLT THROWER !!! Also he is leading his long time running radio show METAL BREAKFAST RADIO! - Rogga also appears or appeared in a lots of other bands like PAGANIZER, RIBSPREADER, THE GROTESQUERY, REVOLTING, DEMIURG, 11TH HOUR, EDGE OF SANITY, THOSE WHO BRING THE TORTURE, PUTREVORE or BONE GNAWER - For fans of: BOLT THROWER, BENEDICTION, VOMITORY, DAWN OF DECAY, DISCHARGE, PAGANIZER and anyone remotely interested in Science Fiction/Fantasy (Doctor Who!)

DOWN AMONG THE DEAD MEN, the Crust-Punk project from the minds of Rogga Johansson and Dave Ingram prepares to release their second full length album, “EXTERMINATE! ANNIHILATE! DESTROY!” in November, via Cyclone Empire. This slab of Death Metal-flavoured Crust sees a triumphant return to the throes of extreme music, infused with the “heads down, no nonsense” approach that will satisfy the aural bloodlust of any raucous Metal head, whether new or old school. Dave is, of course, well known from his time as vocalist for two of England’s mightiest Metal legends, BOLT THROWER and BENEDICTION, and also with his long serving online radio show, METAL BREAKFAST RADIO, now well into it’s eighth year. Rogga is equally legendary with multiple bands under his bullet belt, including PAGANIZER, REVOLTING, RIBSPREADER and THE GROTESQUERY to name but a few. Joining them is Rogga’s fellow PAGANIZER and RIBSPREADER member, Dennis Blomberg. Session drums on the album are performed by Erik R Bevenrud. Prepare yourselves to be Exterminated, Annihilated and thoroughly Destroyed!